My trainer has been working with Wex once a week for two months now. He’s been doing a lot of groundwork on the lunge, and has benefited a lot from learning how to move forward, and respond to verbal queues. He’s learning contact, which is a big change for him.

We’ve transitioned to riding him more frequently. He’s in work 4 days a week now. He’s not the same horse every day of the week, for sure. We’re starting to figure out his patterns and behavior. My rides have been… eventful. I was beginning to think we were years away from ever jumping anything, let alone making our way around an entire course by October.

So, the logical choice was to take a lesson. I’m so glad I did. The horse I had on Saturday was a different horse than I’ve had before. He went forward. He only had a couple of explosions. I felt like this was a horse that might be able to jump this spring.

My key takeaways from this lesson:

I was thrilled with this lesson. My ride the next day did not go quite as well, but it was still better than the week before. I’ll be taking more lessons soon, because the first was so successful. We may have hope after all! 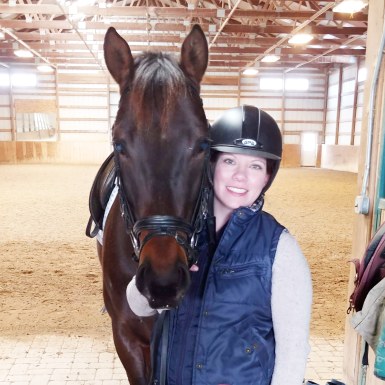